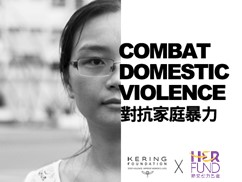 HER Fund has begun its new special project “Empowering Marginalised Women Combating Domestic Violence” in early 2016. The project was initiated as a way to raise public awareness of Hong Kong’s domestic violence and to provide more support to marginalised women who are threatened by intimate partner violence. In the first half of 2016, 1,601 cases of spouse/cohabitant battering have been reported by the Hong Kong Police Force. Out of these cases, 83.6% of victims are women. Apparently, such numbers cannot accurately depict the reality of the situation.

Domestic violence happens in a space which is regarded as “private”. Many of these incidences take place without our notice because domestic violence is seemingly a private matter and irrelevant to human rights. And in fact, there are numerous domestic violence cases that are not reported by the women who are given abusive treatments by their intimate partners. Many of them do not recognize the treatment as domestic violence. A majority of them are reluctant to report violence incidents to the police as they want to protect themselves, their family members and sustain their relationships. Additionally, the 1,601 intimate partner violence cases have in fact missed out many of the marginalized women in Hong Kong, including the sexual minority women, teenage girls, migrant workers and new arrival women. These women’s violent encounters are untold and it is mainly due to their marginalized background where their needs are ignored by the society. Such situations have placed them in an even more vulnerable situation. The Project, therefore, aims to raise the public’s awareness on the overtly under-reported domestic violence in Hong Kong and provide opportunity to marginalized women to voice out their experiences and struggles, as well as to generate support to them.

The Project is funded by the Kering Foundation, established by the Kering Group in France. Kering Foundation aims to alleviate violence against women and support initiatives that work for the same cause. The fund supports three projects that aim to empower local marginalized women to combat violence in intimate relationships. All participatory in nature, they will work closely with teenage girls, sexual minority women and new immigrant women from the Mainland through means such as casework interventions, artistic therapeutic workshops, participatory action research and community education to empower the women in transforming the culture of domestic violence and advancing their quality of life.