Onmyoji Chuk: Practicing Gender Equality is a Way of Life

With grey long hair, a stylish goatee, a long and lithe body, hands full of silver rings and a pair of bright piercing eyes that sparkle, Chuk looks as much the fiction character Onmyoji (a Japanese equivalent to the Feng Shui master of China and exorcist of the West) as an experienced social worker. 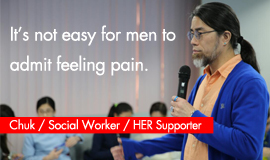 In the popular novel by Baku Yumemakura, Onmyoji saw curses as the result of naming. All things – from people to objects – that have been named (labeled) are cursed. In reality, the independently-minded Chuk intervenes not through magic but social work methodology to help disadvantaged groups to break their negative spells. They include youth stigmatized by schools and society, as well as marginalized women and sex minorities who now benefit from Chuk's contribution as HER Fund’s monthly donor.

"I don’t agree with the dichotomous view of gender and sex. Ideas such as men are from Mars and women are from Venus are cultural stereotypes."

"Gender identity is fluid and changeable, not stereotypical," says Chuk.

This ability to resist making rash statements based on limited and fragmented experiences leads Chuk to a deeper level of thinking known as “double-loop learning”. It may sound academic and complicated, but to Chuk it is just common sense wisdom learned from his mother who helped to treat patients in a Chinese medical clinic years ago.

Then Chuk’s mother was a martial arts practitioner who knew a thing or two about Chinese Medicine. One day she came across a patient who complained about lower back pain. The pain didn’t go away after several treatments and Chuk’s mother recalled a relative who had suffered from similar symptoms. The relative was later diagnosed as suffering from gallstones.

Chuk’s mother called the patient, telling him that he had gallstones and should have an X-ray check up. Her judgment was proved correct, and Chuk saw his mother a heroine. Yet Chuk’s mother refused to get carried away.

"After some introspection she said she was wrong about telling the patient that the problem was gallstones. The assumption was arbitrary. What if the patient was having a kidney problem instead of gallstones?"

In academic terms, we call that critical reflection. In layman’s terms, it is simply humility. "It was exactly because she wasn’t very well educated and lacked proper schooling in the field of medicine that… she understood random guessing, even when she got it right, was problematic. We should never be arbitrary."

This is a principle that has influenced how Chuk works as a teacher or social worker. He would never hastily define or categorize a person or problem.

For example, men often ridicule women behind the wheel, criticizing the latter as inferior drivers. But Chuk disagree.

"Generally speaking, the way women operate machines is different from men. The situation is that now about 80% of road users are men, who don’t quite understand how women drivers operate. If more than half of society’s road users are female, the situation may be very different."

The idea that women are bad drivers is a gender bias deeply rooted in our cultural past. For example, when men see other road users using the turn signals, they will compulsively accelerate, as if allowing others to cut lanes will render them losers on the road. On the other hand, many female drivers will choose to slow down to let others change lanes.

"There is a giant inside everyone. For men, the giant is never allowed to fail or show weaknesses. For women, their giants can fall and take a break."

In fact, rigid gender concepts oppress not only vulnerable women and marginalized sex minorities but men as well. In Hong Kong, opportunities for men to vent their emotions are limited. "It’s not easy for men to admit feeling pain. As boys, they don’t have the skills to do so; as men, they are discouraged from being emotionally expressive."

Suppressed emotions often transform into blind hatred and prejudices against "the others" (opposite sex, sexual minorities). Maybe that’s how our society becomes cursed.

Chuk says pain is common in life. For instance, when his parents passed away about ten years ago, the grief was unbearable. Even to this day he is still grappling with the loss and sorrow.

But such intense pain also helps us to fend off that dreadful feeling of "unbearable lightness of being" amid impermanence, so that we can better understand the potential greatness and limitations of human nature.

"I accept my condition. It would be quite inhuman if someone very close to you passed away and you feel nothing. Descartes said: I think, therefore I am. Feeling pain is a way of being."

"This pain tells me that I am still human"