According to the government statistics, there are over 350,000 Foreign Domestic Workers ('FDW') working in Hong Kong. Thanks to the assistance of these groups of workers leaving their homeland to work in Hong Kong households, we are able to maximize human resources into the continuous development of the city. "Jie Jie" (meaning 'elder sister'; what FDW are colloquially referred as in Hong Kong) have inevitably become an indispensible member of many families, and many families are used to a life with "Jie Jie".

The Hong Kong SAR Government first implemented policies to import FDW in the 1970’s. There are clear rules regarding the salary, meal allowance, and job nature etc of FDW. Also, FDW are required to live in their employer's house. Currently, most FDW are from the Philippines and Indonesia (98%*), the rest come from other countries in the South Asia and South East Asia region such as Nepal, Thailand, Bengal, Sri Lanka, India etc.

In recent years, there have been news reports of FDW being mistreated by their employer or agency, ranging from overcharging of agency fees to violence. A lot of times these incidents have been discovered due to their severity, which begs the question in the eyes of the government, media and public – How many of these stories have been invisible to the public?

Since many years ago, there have been successive establishments of trade unions for FDW of different nationalities, to promote education of FDW in their rights and to assist them in dealing with issues encountered whilst working in Hong Kong etc. Under the sponsorship by prestigious law firm - Linklaters, and with HER Fund’s co-ordination, 4 core member representatives of FDW trade unions were invited to a 4-session course "Public Speaking Skills" during March to May 2018, with a professional instructor team and Linklaters’ voluntary mentors. The members learnt how to collect information, to sort, plan and create the contents of a speech, and public speaking techniques, accumulating to a final presentation on 3 June - where they are to give a speech on a topic they are passionate about in front of the instructors and mentors for their evaluation. The purpose of this event was to facilitate the participants to undergo structured training in order to:

1. Increase their confidence in external communication
2. Enable them to effectively express topics and contents of interest in a clear and attractive manner
3. Better understand their abilities from their performance, paving the foundation for further development and learning

We have even interviewed several participants to talk about their feelings. Although different trade unions have different objectives, but with a common goal, they can strive for the rights and protections of FDW, build a mutually beneficial relationship between employers and FDW, and create a harmonious environment.

Parichat is a member of Thai Migrant Workers Union (TMWU) and has been in Hong Kong for over 27 years. She is passionate in union affairs and is also in the committee of the Hong Kong Federation of Asian Domestic Workers Unions. She said, "In the past, we have never had any formal public speaking skills training. After this learning experience, I have learnt how to grasp the main points and capture the audience's attention etc, which has increased my confidence to perform a speech in front of a crowd; it was a very interesting experience!" Parichat has already planned to share what she has learned to other committee members, in the hopes of training more leaders to fight for their rights. 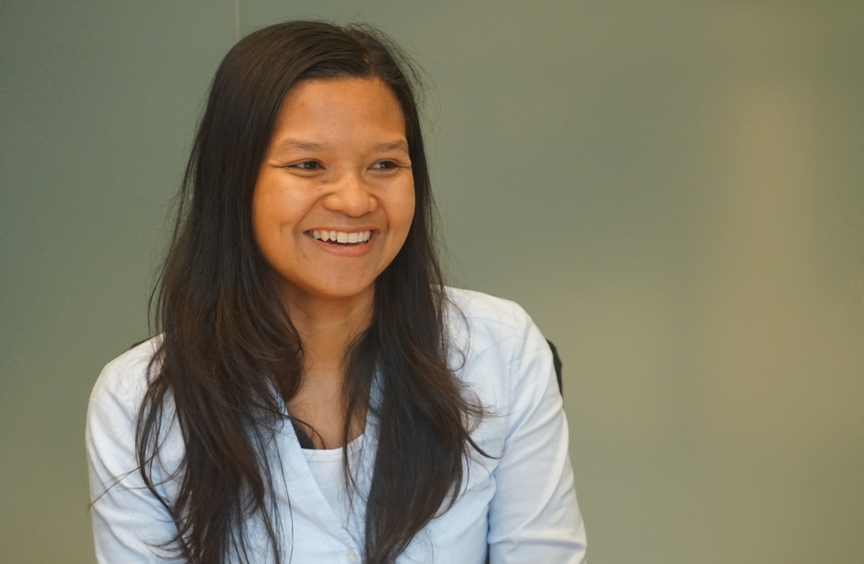 Liz is a member of KOBUMI (Indonesia) and has been in Hong Kong for 10 years. She thinks that Hong Kong is a very suitable place for FDW to come work in, but from the cases she has dealt with in the community for the past 2 years, a lot had arisen because the FDW did not know their rights and the current protections in place. "This course has taught me a lot on external communication and public speaking, and has increased my confidence in how to promote our message in the future, such as letting more people learn about our work and objectives, recruiting new members and participants, as well as gathering momentum to fight for the rights we deserve!" 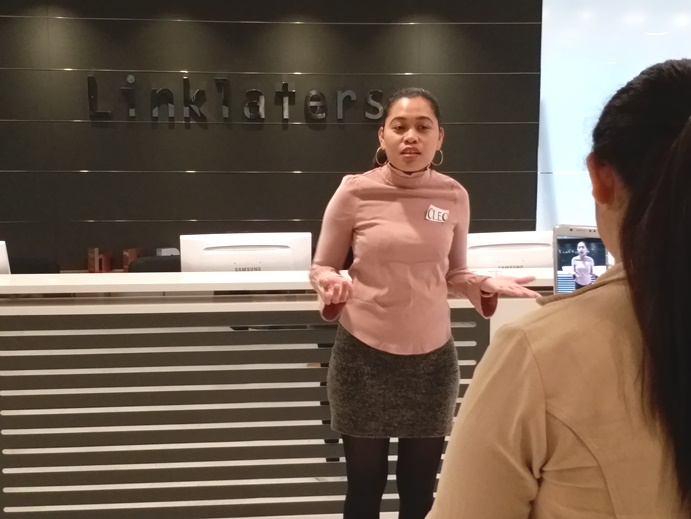 Marciel, a Phillipina in the Progressive Labour Union of Domestic Workers-Hong Kong (PLU), has been working in Hong Kong for 3 years. Although the duration isn't long, as a holder of a bachelor degree in education and lover of learning, she is currently working alongside studying for a master’s course in education. "The chance to participate in this training course has opened my eyes. I like to stand in the frontline and speak in front of people. After joining the union, I knew that I had to do a lot of education work to help people understand their rights and protect themselves. By standing at the forefront to speak on their behalf and sharing what I've learnt with them, I hope that my learning experience will benefit the members, so that everyone can express what they want to say more clearly and systematically, to raise people's awareness on the lives of FDW in Hong Kong and the issues they face. The learning process has been very interesting, before starting we had to do a lot of homework and gather Information, although the course was short, I had gained some valuable experience from it!" 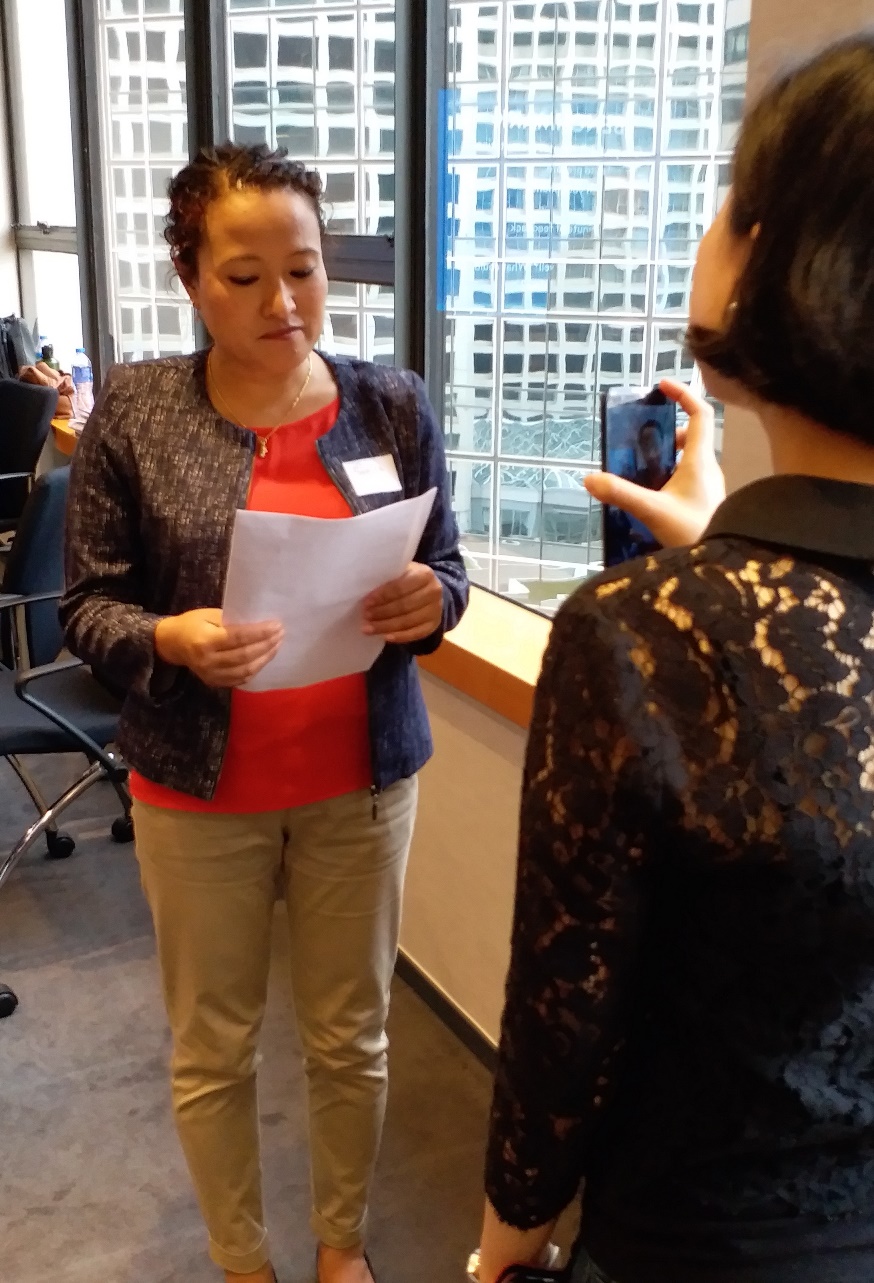 Being a FDW group for a minority population – Union of Nepalese Domestic Workers in Hong Kong (UNDW)’s representative Samira was very happy to be able to participate in this course. She has been working in Hong Kong for 9 years. As compared to other countries, Hong Kong is a very good location for FDW to work in, as the salary is higher and there is a certain level of policy protection, but of course Nepalese FDW have also encountered similar predicaments and difficulties as other FDW. She believes that, as long as you gather more solidarity and be willing to speak up, it can reduce problems. "I used to be very nervous when speaking to a lot of people, but after the public speaking knowledge I have gained through this training course, in addition to the repeated practicing, my confidence has increased a lot, which will help me in my work at the union." 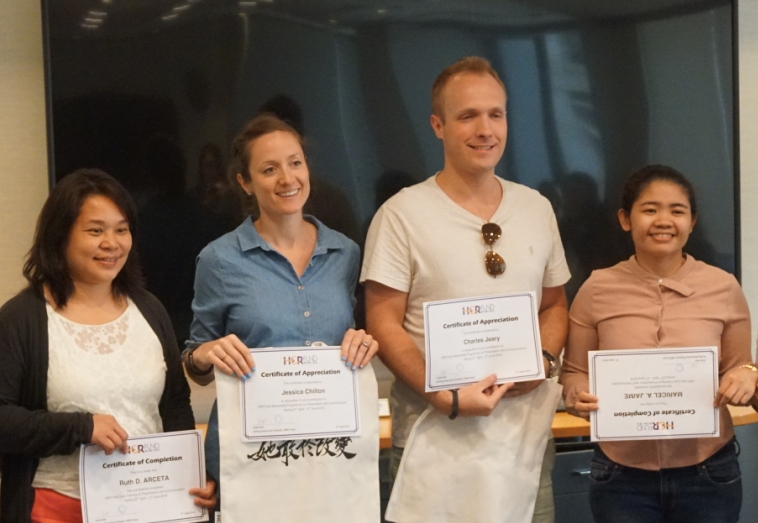 This event was an unprecedented success, due to the contributions by a team of professional and passionate instructors and voluntary mentors. One of the mentors - Charles who is from England has worked in Hong Kong for 4 years - shared his feelings with us, "This is a very inspiring activity, being able to get to know people from different backgrounds and have an insight into their lives. It has been an eye-opener and an invaluable experience!" Previous exposure to FDW have come from media reports, most of them concerning incidents to do with abuse towards FDW etc, participation in this event has allowed him to personally know more about FDW. Charles said, "I have now heard first-hand of some shocking situations. For example, some FDW not having enough food and often go hungry. I am surprised that this can happen in a city as developed as Hong Kong. I am very happy to participate in this event to help them strengthen their abilities and express their interests."

The day of the interview happened to be the last day of the course - this is the day that they had to face the audience to perform a speech and get comments from them. As I watched them practice diligently outside the venue, I could feel their confidence and how much they cherished the opportunity to learn and perform. I had to admire their persevering attitude in learning, for themselves and to have a charismatic voice on behalf of their union sisters.