Housewives in Tin Shui Wai and sexual minorities, surprisingly, need each other, technically and spiritually. These two groups seem to have no common interest, however, how are they bonded together? 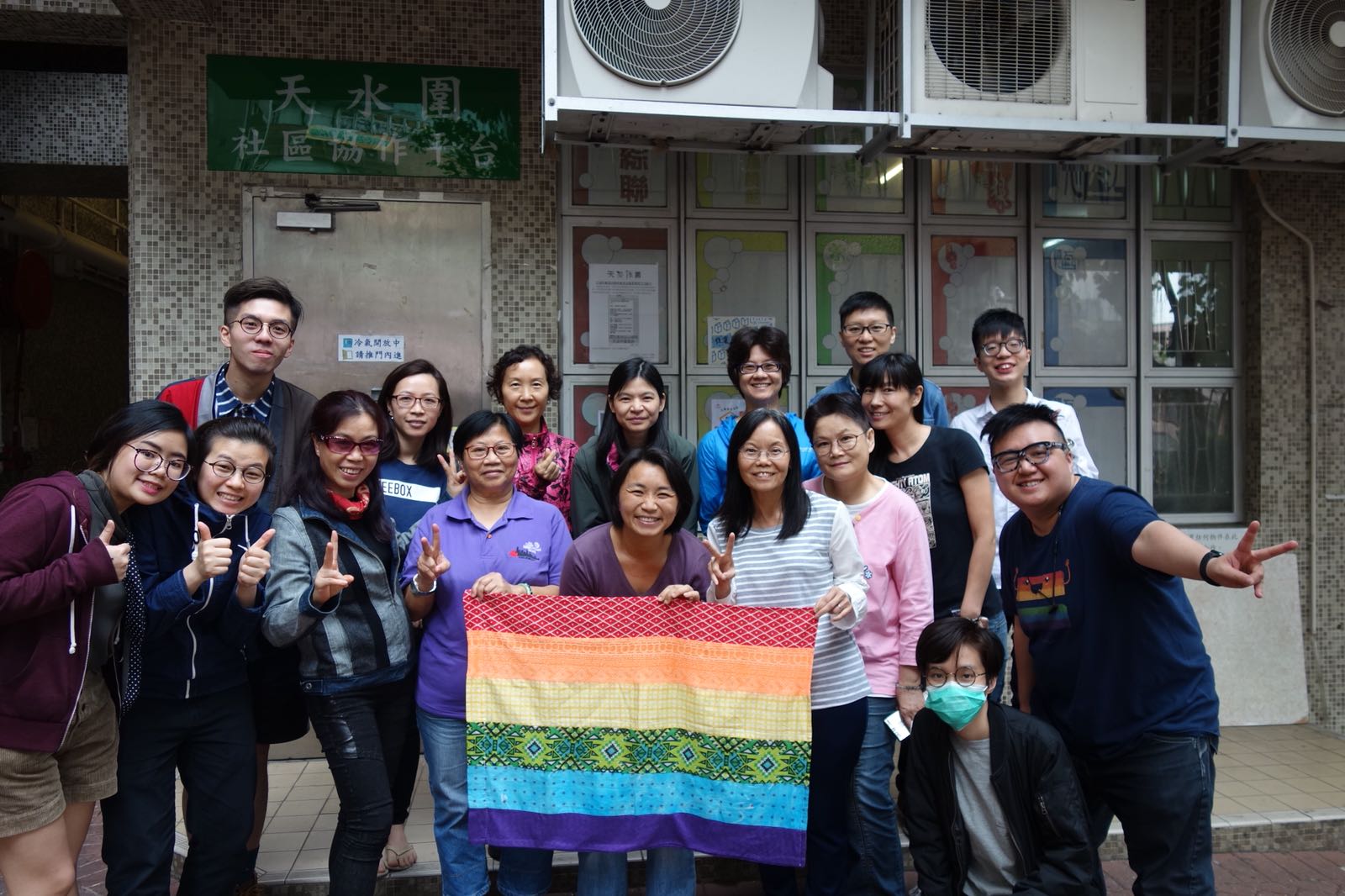 Enjoy the intimacy with strangers

“In most cases, oil and water don’t mixed together, but they are essential for making lotion. It is like love, love nourishes us no matter however distant we were,” noted by Kenn Chan, Founder of Pride Lab.

Connected and funded by HER Fund, Pride Lab has successfully co-organized courses with the Tin Shui Wai Community Development Network. Courses are leveraged on the expertise from each side, Pride Lab members taught housewives of filming techniques; the women shared their knowledge on producing ecofriendly skincare products as return.

“Moms teach you how to make lotion with Love” is one of the workshops which  hosted by the housewives aged between 30 and 50 year-old for the LGBT+ community on making hand lotion.

Workshop is harmonious. The two groups are so close to each other in the small studio, it is filled with laugh and conversations. One of the participants has just crossed the border from the Mainland in the morning to the workshop meeting her partner here. The lady shares her feeling toward the workshop: “Two group of strangers have met here today and create such intimate product together, I feel strange but I do like the fell of getting close to them.” 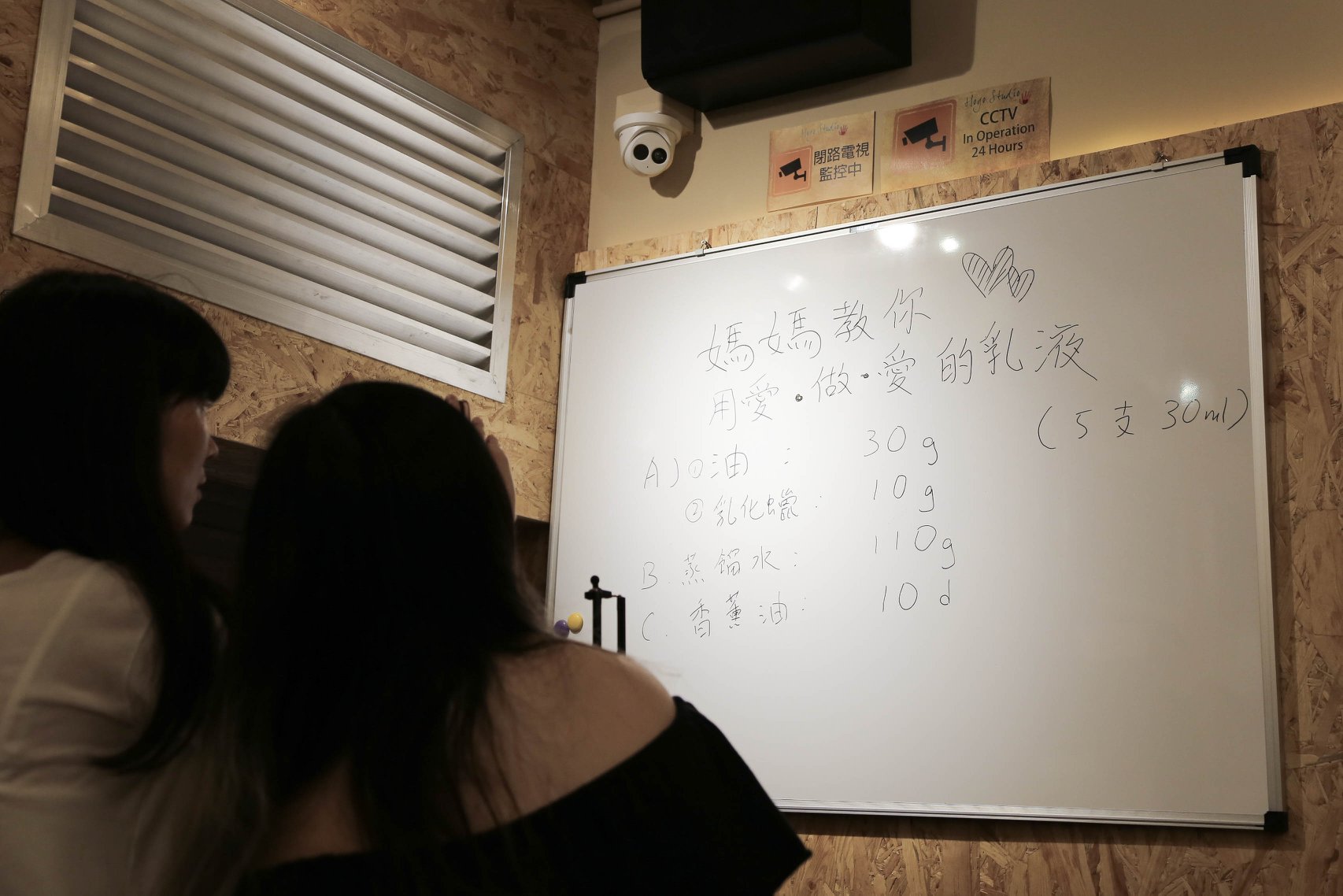 We are human all have sexuality

The only source about sexual minorities that an ordinary housewife may receive is protest scene presented on TV. Yuk Lan, one of the housewives in workshop, her primary objective was to learn filming techniques in order to get her hand-made soaps online. However, she learn more than just filming.

“I didn’t aware who are our instructors at the beginning. I realized that they are from sexual minority groups later on. I learned that there are more than just gays and lesbians in the minority group.” Yuk Lan shared her first impression from the group.  As time went on in the workshop, she realizes everyone are the subject matter of sexuality, we are all human who have sexual desires.

“Talking about sexual minorities with my family is challenging as they don’t accept it. They consider heterosexual relationship is the only choice of human beings. Honestly, even I still don’t understand their choices but I wish to understand. There are always reasons behind choices and, it’s personal. Therefore, we have no place to discriminate or oppose them.”

Understanding is all about leaving our own conform zone and be honest. Ah Ha, one of the housewife instructors, thinks that there are too much information we could get in Hong Kong, fragmental and one-way promotion is no longer an effective way to educate people. We should line up more activities for different groups to get together. She believes that shorten the physical distance could drive mutual understanding.

One of a housewife teammate were shocked by Kenn Chan’s tight hug as she thought Kenn was a man. As time goes on and more interactions between two women. The woman now always takes initiation to give hugs to Kenn. Hugs become a symbol of mutual support and love between them.

Ah Ha admit that she has focus on women's rights in the past year but has very limited knowledge about the sexual minority group, not to say the transgender people. “That‘s why I feel the distance when we sit together in the early stage of workshops. Honestly, I wanted to be friend with them, but I don’t know how to start. I was also afraid that I would say something wrong that offend them.”

“As the workshops go on, our physical interaction do relief my worries. I then realized that I can just be myself, too much concerns on their sexuality is just the burden of making real connection with others. No matter what we are, we are all ordinaries.”

Fan and Jimm, volunteers from Pride Lab, are the generation born in digital era. Filming and photograph are part of their daily life. With the pride of their background, they did consider housewife is the name of ignorance, narrow-minded and knows her kitchen only.

After few interactive workshops, they then realized how much these housewives care about the society and how eager they want to learn new technologies. The housewives are so eager to create a micro film to capture the life of grass-rooted housewives.

Some participants described these housewives have thousand hands. Fan is totally agree: “They are powerful and wise; they have firm position in fighting for women’s rights. In the meantime, they are also skillful, from stitching to cooking... me and my friends have known nothing about these.”

Jimm, who works in catering industry, tells us that this workshop let him realized that oppression is not only abstract concept written on books, it is something that affects everyone’s real life in every class.

“I seldom talk to my family, this event allows me to interact with so many housewives and moms. Learning how busy their life in rearing children and taking care of household chores offering me a different perspective of life.  I get to understand more about the difficulty of life that my parents have to deal with.”

Jimm says that stereotyping females are actually stereotyping male, and the "sexual minorities" beyond mainstream.

“In fact, we (sexual minorities and housewives) have the same goal, we all want to gain back the right that we all equally shared, the right that mainstream considers we are not belong to.”