Grace, the Lesbian Priest: God Bless Us ALL

Harboring a deep secret and living in guilt for years, Grace, Hong Kong’s most outspoken Lesbian pastor, says being honest with oneself and bear its consequences is the righteous way to understand and experience unconditional love.

"Listening to stories of those expelled from churches or forced to repent…it’s sad and terrifying," says Grace.

With a few white hairs scattered across her head and a tomboy look that suggests both a steely and empathic character, Grace gets emotional as she talks about the gay and lesbian Christians she comes across in the Church of One Body in Christ. 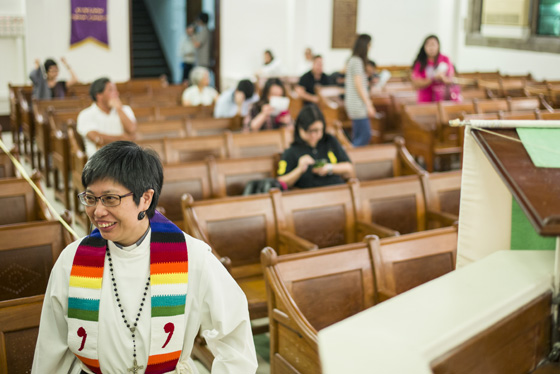 "Many of them were oppressed by mainstream churches. There was a girl who was forced by her church mentor to repent and to recite, word by word, passages about homosexuality from the Bible," says Grace.

"There was also a tomboy who was forced to seek medical treatment, taking female hormones that led to lactation…"

Grace understand suffering because she has also suffered.

Raised in a traditional Christian family, Grace – whose father is a pastor – has always known herself to be a lesbian. Yet she also knew that she must hid her true self from family and friends. It was not until she went to Taiwan for college that, freed from family pressure, she met her first girlfriend.

Yet the good times were short-lived and the relationship turned sour after her girlfriend started dating men. Feeling hurt and devastated, Grace veered back to the conventional course of marriage and motherhood: she married a classmate she met in Taiwan and gave birth to a little girl. Life, in the eyes of others, was close to perfect.

Grace’s vocation has always been serving in the church. After much effort she was ordained as pastor in 2005, followed by five years of service at the Evangelical Lutheran Church of Hong Kong. Leading the life of a faithful wife and caring mother, Grace once thought she had overcome the “sickness” of homosexuality.

"Then I thought finally I had succeeded changing my sexual orientation thanks to faith."

Her "success story" came to an abrupt end in 2010 when she met her second girlfriend. "I was truly in love with her and I wanted so bad to be with her that I started thinking about coming out."

Because of love, Grace finally came out and, divorced from her husband, she no longer had to pretend being somebody she wasn’t.

Coming out was a very difficult decision, yet Grace knew it was time for her to face up to the challenges of staying true to herself. Throughout the process she also realized that faith, real faith, should free people from shackles rather than tying them to dogmatic beliefs.

Losing her job, family and friends, Grace has lost almost everything for the simple fact of her loving a woman. The pressure is relentless but Grace has stand firm, knowing that with the grace of God the barriers of stigma and discrimination would one day be overcome.

Now serving at the Church of One Body in Christ, Grace opens the door to everyone, from gays and lesbians, the marginalized and oppressed communities to sex workers. There they worship God together and put their faith into practice by advocating social justice as well as facilitating democracy at all levels of society.

“Compared with the situation 10 years ago, Hong Kong is now apparently more receptive to gays and lesbians. Many large corporations are supporting LGBT movements and over the past five years we have seen more celebrities coming out. There are also discussions about enacting anti-discrimination legislation in respect of sexual orientation," says Grace.

"However, opposition from mainstream churches has remained strong."

Why churches are so sensitive to gender issues? Grace says it is because many churchgoers consider “marriage between a man and a woman lasting a lifetime” as the bedrock of their religious faith.

She says there's more than one voice in faith, and her job is to put forward diverse views concerning gender and Christianity. Since 2013, Grace has been working hard to commence a dialogue with church leaders, forming the Covenant of Rainbow with gay-friendly churchgoers as well as taking part in countless campaign to combat discrimination against sexual minorities.